President Obama honored 100 winners, including Dr. Monica Cox, with the Presidential Early Career Award for Scientists and Engineers (PECASE). This is the highest award bestowed by the U.S. Government upon scientists and engineers in the early stages of their independent research careers. Read the full article.

Dr. Cox serves on a NSF-panel at the White House 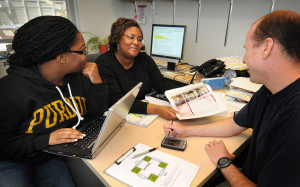 Dr. Cox was one of 9 faculty in Purdue’s College of Engineering and one of two faculty in the School of Engineering Education to receive a National Science Foundation CAREER Award. Read the Purdue news release Read the full press release.

Dr. Cox is appointed as a Visiting Professor at UDLA

In July 2008, Dr. Cox presented two assessment workshops to approximately 60 faculty representing six universities. During her visit, she was also appointed as a Visiting Professor in the Department of Food and Chemical Engineering at Las Universidad de las Americas Puebla (UDLA).

Dr. Cox was selected as an “Emerging Scholar”

In January 2008, Dr. Cox was selected as one of 10 “Emerging Scholars” by Diverse Issues in Higher Education. Read the full article.

Click here to view academic publications by the i2e2a team.

Click here to view media appearances by the i2e2a team.